The Ikea Foundation Switzerland has supported the discussion between the practical and the theoretical with trend-setting tasks in the sectors of architecture, design and arts and crafts for five decades. The foundation is pursuing this objective by providing grants to young talented designers from Switzerland who wish to follow a further education programme abroad. The foundation also awards financial grants to projects.

In 2023, the Ikea Foundation Switzerland will become 50 years old. It is celebrating this anniversary with an exhibition in September 2023, portrait films about beneficiaries and a new sponsorship format, initially set for three years: an internship in product development at IKEA’s headquarters in Älmhult.

Back in 1973, Ingvar Kamprad opened the first IKEA shop outside of Sweden in Spreitenbach. With the decision to open a furniture store near Zurich, he wanted to have his entrepreneurial concept ultimately tested by the Swiss, who were considered to be particularly critical. For he had told himself that if IKEA could make it with the tradition- and quality-conscious Swiss, he would be successful everywhere.

Customers quickly liked the inexpensive furniture from Sweden, and the IKEA concept became a success story in Switzerland right from the start. As a thank-you to the customers, Ingvar Kamprad founded the Ikea Foundation Switzerland in Zurich on 2 November 1973.

Since then, it has been supporting Swiss designers with scholarships and financial grants so that young talents can realise their product ideas for furniture, lighting or textiles. In this way, the foundation aims to stimulate innovative thinking and contribute to diversity in Swiss design, architecture and arts and crafts.

To celebrate the anniversary, the Foundation will show a selection of actually implemented works in September 2023 (the exhibition venue will be announced in spring 2023). With this exhibition, it will present important objects and projects that young designers have developed and successfully brought to market in recent years thanks to the Foundation’s support.

In its anniversary year, the Foundation is also dedicating film portraits to scholarship holders. In them, designers will have their say, reflecting on their funded projects and reporting on their valuable experiences as scholarship holders abroad. The films will be published in stages over the course of the anniversary year 2023 and announced in advance via the newsletter.

Ingvar Kamprad, founder of the Ikea Foundation Switzerland, was born in 1926 on the Elmtaryd farm near Agunnaryd in Småland in southern Sweden.

Following a carpentry apprenticeship, he founded the IKEA company in 1943, at the age of just 17. He initially sold various consumables such as matches, ballpoint pens, tablecloths and nylon tights. In 1947, he expanded to add furniture to his range, which he sold predominantly to farmers in the province of Småland by mail-order for the purposes of keeping costs low. He concentrated fully on mail-order furniture from 1952.

In 1974, Ingvar Kamprad moved to Switzerland to settle down with his wife Margaretha in Epalinges by Lake Geneva. Following the death of Margaretha in 2011, he returned to Sweden, near Älmhult, in August 2013. Three children resulted from his marriage to Margaretha: Peter, Jonas and Mathias Kamprad.

Ingvar Kamprad died on 27 January 2018 at the age of 91 years after a brief illness in his home in Älmhult. In the Ikea Foundation Switzerland, the spirit of his life’s work will act as a claim and inspiration beyond his death. 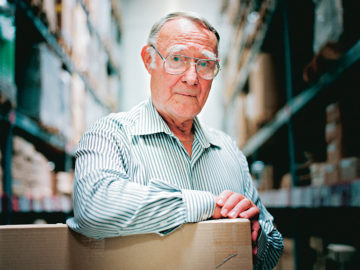 The foundation board decides on the grant applications during three meetings per year. At present, an annual budget of CHF 600,000 is available for foundation grants. The Ikea Foundation Switzerland endorses between 50 and 60 applications per year.